Known as the White City, Arequipa has got to be one of Peru’s most beautiful destinations. Surrounded by mountains and steeped in history, Arequipa is a masterpiece in terms of architecture. Indigenous and colonial cultures collide within the very walls of the city, so if you love museums and religious buildings, you’re going to have a bloody great time of it.

How to pronounce Arequipa: Ah-reh-keepa

Things to do in Arequipa

Arequipa is one of the few places in which we wouldn’t recommend the free walking tour we took. The tour we went on, which met at Casona D Santa Catalina, was run by a man who seemed to doubt his own words, and didn’t have a huge amount interesting to say. Disappointed that we may have made a poor choice of tour company despite thorough review-checking, we asked a few of our friends how their tours with other companies were, but it seems there are feelings of below average content and unenthusiastic guides across the board. This tour is one of the rare well-reviewed options for city tours.

Spot condors in the Colca Canyon

One of the most famous things to do outside Arequipa is to visit the Colca Canyon. This can be a single or multi-day trip depending on how much physical torture you fancy. The canyon is the second-deepest in the world, and is home to the condor, the largest bird in the Americas. Obviously there is no guarantee of catching sight of any, but if you happen to be so lucky, prepare to be well and truly wowed.

No one should have to miss out on Alpaca World. A short walk from the city centre, this is home to several different types of alpaca, which you can feed through the fence. There is then a short museum where you can see the processing of wool, and watch a woman weave the wool in the traditional Peruvian way. It’s not the world’s most riveting day out, but it’s free, so…

In Museo Santuarios Andinos, you can see a mummified Inca girl who was killed as an offering to the gods (known as Momia Juanita, or the Inca Ice Maiden), perfectly preserved in her original clothes through hundreds of years of being frozen. Unfortunately she’s moved to another museum for preservation for a few months of the year, so check before you go in that she’s there. You will get to watch a video for around 15 minutes before entering the main museum, which has both Spanish and English slots. Note that this is one of the more expensive museums we’ve found in South America, and you have to leave cameras outside the exhibit in lockers.

Explore the religious history in Arequipa

Just walking around the centre, you’ll be able to see the many churches which were engraved with Inca influences in order to convince the indigenous people that Christianity was the way forward. Look closely, and you’ll find references to the Snake, Puma and Condor; Inca representation of the earthly present, the afterlife of the ancestors, and divine heaven of the Gods.

In Iglesia de la Compañia, there is even a painting of the last supper with a local twist – Jesus is depicted offering the Peruvian dish ‘chuy’ (roasted guinea pig) to his disciples.

And of course, there’s no missing the colossal Basilica Cathedral de Arequipa (above), which stands proudly along one side of La Plaza de Armas. One of the towers actually collapsed due to an earthquake and was reconstructed in 2002, but the building has managed to maintain its colonial beauty. Made of volcanic stone, it is one of the main buildings that gives Arequipa the nickname ‘The White City’. 15 soles will get you entry and a guided tour (but no photos are allowed inside).

Santa Catalina Monastery is a splash of colour, and a lovely way to spend an afternoon. The Monastery is still up and running, so remember to be respectful in terms of the noise you make and Insta-poses you strike.

For the adventurers out there, you can hike El Misti mountain, which looks over the city. This is a two-day trek costing around $100 with local operators. At over 5,800m in altitude, it’s best to tackle El Misti when the sky is clear! Since we visited Arequipa during rainy season, we sadly never even caught sight of the mountain behind the clouds.

Where to stay in Arequipa

We stayed in 2 hostels in Arequipa, and one of them we will recommend until the cows come home. Le Foyer was clean, airy, spacious, and the staff were very attentive. The 4 course breakfast served in the rooftop bar certainly sealed the deal for us (dem views). Since Lozzy’s sister met us in Arequipa, we were able to get a 3-bed room at a pretty reasonable price – less than $30 a night.

The other hostel we stayed in, La Puerta del Sol, was decidedly less luxurious. We started off in a private twin room, which oddly had a huge window onto the main stairwell and not enough curtain to cover it. We then asked to extend our stay by one day, and the woman at reception said that would be fine, however, the next morning we had a man barge into our room angrily telling us we’d missed check-out, and that the room had been booked by someone else overnight. Instead, we were given spaces in a 6-bed dorm which was just an old converted cellar/storage room, and was dark, dank and cramped. One of our least enjoyable night’s sleep in Peru (but we’ll give that crown to Loki, Máncora).

Where to eat and drink in Arequipa

The most snazzy place to fill your stomachs is in one of the many bars and restaurants in the cloisters of the Plaza de Armas. You will pay a little more for these, but the views in the evening are worth it. Most of the upper floor establishments don’t have a proper entrance, but they’ll have a member of staff with a menu trying to get you up the stairs; feel free to tell them you’ll just have a look upstairs before committing to staying. 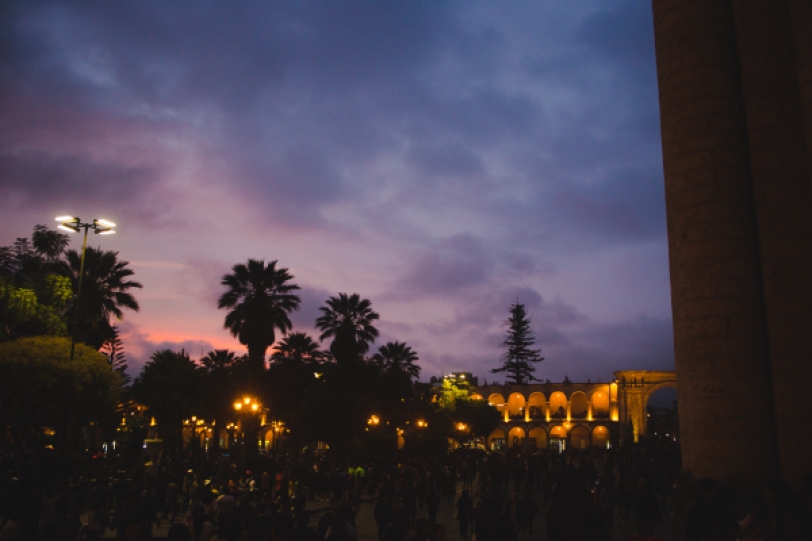 Just off the main square, to the right of the cathedral, there are several places for a brunch or an afternoon drink + people watch. Our favourites were Capiccio and the fruit smoothie place next door, which are just opposite Starbucks.

And hell, we’re not ashamed to say it; Pizzahut from the fast food hall next to Starbucks is inexplicably cheap and strangely better than anywhere else we’ve ever eaten it. Maybe this is slightly influenced by the fact that we were deathly ill and hadn’t eaten properly in a week, but we did go back again just to make sure…

Where to watch European football leagues in Arequipa

Wild Rover Hostel has a big screen in their back bar upon which they show big games. If you’re not a guest, you can explain at reception and they should let you in to watch it.

Máncora, Peru's surf and party capital that pulls travellers in

What to expect on the Rainbow Mountain trail: the Cusco day-trip that will leave you breathless