Despite being a somewhat sleepy country with an incredibly relaxed vibe (even in the capital Montevideo), the party scene livens up post-midnight. It is very common for friends to have a ‘previa’ at home before heading out to a ‘boliche’ at around 2am – with the typical party scene going on until about 6am or beyond in Uruguay.

Whilst this is nothing surprising for a Spanish-speaking country (and almost tame compared to my time in Madrid), there were a few local nuances to beer in Uruguay which stood out to me.

After this guide to beer in Uruguay, you may also want to have a read of:

A traditional beer market, with craft creeping in…

Uruguay is very much a lager country, with a relatively small number of local players dominating the on- and off-trade markets.  Brands such as Pilsen, Patricia and Norteña are the most easily found, with Pilsener-style lager being the main offering. Whilst international beer is available in supermarkets, it is harder to find in a typical café/pub/bar.  There is a small emergence of craft beer pubs, although this is only really applicable to the capital.

What is apparent, however, is that some of the more established brands are looking to push consumers’ taste buds out of lager to different types of beer. Rather surprisingly, at least for me, is that porters are probably the second most available type of beer with a ‘tostada’ (an ale) not far behind.

Local brands, such as Patricia, offer a Porter and a Tostada version – often at a discounted price in the off-trade alongside the purchase of the brand’s lager variant, in an effort to encourage the broadening of tastes.

A Belgian twist in Uruguay

Despite availability of international brands being somewhat limited in most establishments, the emergence of Belgian beers, especially in the off-trade is clear to see.  Well-stocked mini markets and supermarkets boast a good array of international Belgian brands such as Hoegaarden, Leffe and Stella Artois.

Whilst Stella Artois is available in the 1L bottles, the blonde Belgian beers come in single-serve bottles, and therefore have less exposure and success across the country. Stella Artois also offer a black beer (Stella Artois Noire) offering a more complex taste, in accordance with market trends.

Visibility: how to win in the on-trade

Merchandise in bars, cafés and restaurants is key to building brands in Uruguay, with Pilsen – the market leader – the most visible brand of beers if you take a walk down any street.

Is a bar really a bar without bright yellow Pilsen branded chairs, parasols and awnings?!

Unlike in the UK, a bar or restaurant tends not to have a wide selection of beers for choice (think about a typical English pub offering four or five nondescript lagers alongside one another), with the house beer forming one of the key attractions to an establishment.

Depending on which part of the country you are in, the most commonly seen brands would vary mainly between Pilsen and Patricia, however it is very clear that the on-trade battle is won before a consumer even steps through the door.

Like much of across Latin America, 1L bottles are the hero SKUs.  There is a real sense of sharing among the Uruguayan community and this shines through on the food and drink scene, with restaurants offering typical meals such as Chivitos or Milanesas for two or four people as well as the household favourite ‘mate’ – a herbal tea-style which is shared around and rarely too far from the hand of a Uruguayan!

Sharing and bonding over beers is a large part of culture in Uruguay when it comes to a ‘previa’ or even out at bars and restaurants.  Pilsen sum up this philosophy of sharing with a positioning around the beer being the ‘Alma de amigos’ or ‘soul of friends’, articulated no better than in their multi-pack of 3x1L bottles with the phrase ‘Grab yourself three excuses to get together with friends’ plastered across the front. 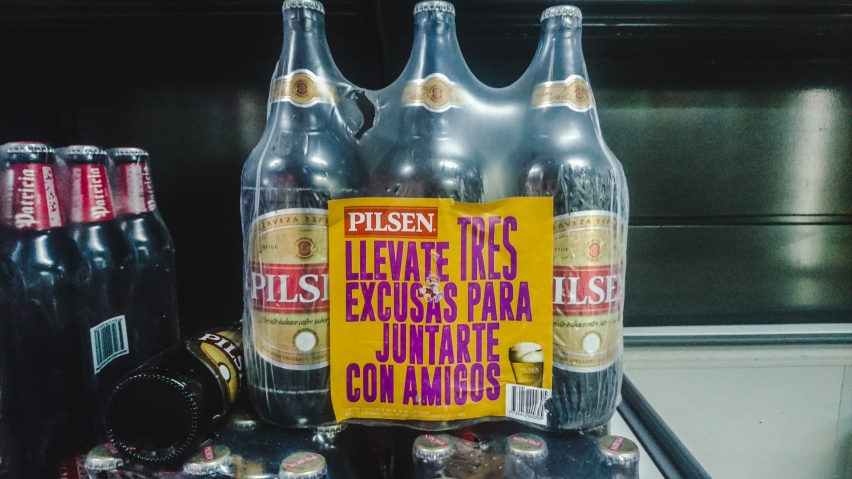 Having tried a range of the leading brands and some more local craft, it came down to a toss-up between Patricia and Norteña, two fairly unassuming lagers, but always refreshing and hit the spot nicely with or without food.  In the end, with a similarly good taste and at a price point of around 20% lower than Patricia, Norteña rightfully earned its place as my number one!

Enjoyed this branding analysis of beer in Uruguay?

Learn from our travel mistakes